Gustav was the son of a Swedish senator and of a noble family whom played a prominent part in aristocratic politics of 15th-century Scandinavia. He was raised in the courts of Sweden, and participated in the fighting against Denmark. In fact, the connections his family had with the royalty at the time, supplied Sweden with three regents.

Gustav fought in the army of Sten Sture the Younger against Christian II of Denmark in 1517–18. Sweden at that time was a part of a union consisting of the Nordic countries (Denmark, Norway, Sweden and Finland), but the union was a mess in many ways. The Danish king, Christian II tried to dismantle the union by using brute force. King Christian attacked Sweden in 1520, and the Swedish Regent was killed. It was then that Gustav found himself held hostage in Denmark, but later returned to Sweden when the King promised to show leniency towards those nobles who wanted to fight back.

The Danish king, Christian II then called a “friendly” meeting with all of the officials, but Gustav chose to stay home. Gustav found himself spared because of that decision. Christian II rounded up the nobles, and bishops and had them beheaded in the Great Square in Stockholm. Gustav’s father, brother-in-law and uncles were murdered, together with about 75 other men in a mass execution known as “the Blood-bath of Stockholm”.

The Vasa family lands were confiscated, and most of Gustav’s family were imprisoned. Instead of hiding or running, he rose to the occasion and started fighting back by engaging the people of Sweden to rise up for their country. He started sowing the seeds of rebellion against Christian II . The army of Denmark pursued him, but he managed to escape which many tales of these adventures are told today. He managed to receive backing from the Hanseatic League, which also wanted the Danish king weakened. This union allowed him to gather together a sizeable army, and in 1521 he was elected Regent of Sweden. This army then attacked the Danes in several engagements, and step by step managed to oust the Danish king.

Gustav pushed through to establish Sweden’s independence, and his leadership through this time may have been what was responsible for his election as king. In 1523, at the age of 27, Gustavus was elected King of Sweden. He set about reforming the country, using methods inspired by rulers like Henry VII and Henry VIII of England.

Gustav made Sweden an independent state and gave his country, for the first time in a century, nearly 40 years of stable and intelligent government. Gustav managed to unite Sweden, and also laid the foundation for Sweden’s professional army that was to make Sweden into a regional superpower in the 17th century. He managed to shape the foundation for modern Sweden.

Beyond those great achievements, he ranks among the heroes of Swedish history because of his struggle to turn Sweden from a Catholic country to a Renaissance state with a Protestant church. This was by far some of the hardest wars many countries had to battle.

In the documentary A Lamp In The Dark: Untold History of the Bible, goes into great detail the tremendous struggle individuals had to endure throughout the Middle Ages. I highly recommend watching this documentary on You tube to gain a better appreciation for the battle against the Catholic church.

The Catholic church was against having the bible in the hands of the common man, and threatened imprisonment and death to any persons who disobeyed their rule. Valiant warriors of the faith in England such as John Wycliffe, William Tyndale, Martin Luther, considered the cost for the sake of sharing the Gospel that salvation IS through Jesus ALONE, not through works, or anything else. They rejected the notion that the Catholic church set forth such as “sacrament” which individuals had to confess their sins to a priest instead of through prayer to our heavenly father to forgive our sins.  (1 John 2:1-2)

The Catholic church positioned itself in control of individuals souls (salvation), and even went as far to ask money from people whose loved ones had died whom could be removed from “Purgatory” (Hell), which they taught every believer goes first, which was contrary to scripture.  The Catholic church’s sheer dominance made them extremely wealthy because of the vast amount of people willing to paying money to remove their loved ones from the “Purgatory”, and this allowed the Catholic empire to throw their weight around in many countries. Believers also fought ideas brought by the Catholic church that the Pope was Yahweh himself on earth, stated by Pope Leo XIII, Pope Innocent III, and Pope Boniface VIII, which contradicted scripture.  Once the common people were able to read the Bible, through the Protestant Reformation, they could hold the Catholic church accountable by the scriptures themselves. The Gustavian Family by Ulrika Pasch, 1785,

All the kings from Gustav Vasa to Gustav IV Adolf

Gustav fought hard to ensure the triumph of Lutheranism (named after Martin Luther), and the suppression of Roman Catholic customs. Gustav Vasa has been known as the founder of modern Sweden, and the “father of the nation”. Gustav looked up to Moses, whom he believed to have also liberated his people and established a sovereign state. Gustav I’s breaking with the Catholic Church is virtually simultaneous with Henry VIII doing the same in England; both kings acted following a similar pattern.

To understand the Baroque period, a person must take into account the religious and political tensions at the time. The Catholic church during this time was a very powerful entity and one of the biggest customers of of art. During the seventeenth century artists were being asked by the Catholic Church to create pieces of art which then could transend a message through which could be then understood by the uneducated common people.

The Catholic Church through this time was going through some major changes known as the period of ‘Counter – Reformation’ which began with institutional changes within the Catholic church as we discussed earlier. The clergy recognized that they could communicate through art by using the more theatrical ‘Baroque’ interpretation of religious themes. The Church buildings were designed and decorated in such a way which the Catholic church itself was trying to build it’s own empire kingdom apart from the Kingdom of God which we are told through the bible was the bodies of his people, not buildings and objects.

The mass amount of wealth church accumulated through using the very word of God in deceptive ways allowed them to buy thousands of paintings, thousands of statues, and buildings that were the best of the best through this time period. They owned the nicest buildings, and the most beautiful art across Europe, so it was no wonder why their style at the time became the design that many copied in architecture, interior design and so forth.

The upper classes ALSO loved to show off their wealth and saw this new style as rich, and unreachable for the common folks, so they embraced it, hoping to stand out. Wood carvings appeared lavish, and obviously was a style that many of the peasants could not afford. Baroque art and architecture was one approch they used to wave their money for the world to see.

From Italy, Baroque quickly spread to essentially every country in Europe. Each country incorporated its own customs and heritage with Baroque. Some were more extravagant and others more conservative with the design style. In Italy we saw tremendous detail in the furniture, where as in Sweden we saw more of a refinement with the style. The overblown carved details were softened, and mimimized. During the middle of the 16th century the Baroque Era gradually gave way to the Rococo, and this wave of style change hit each country at a different time in history. Gripsholm Castle belongs to the famous castles in Sweden.

This view shows how kings slept in the chamber of Charles IX. 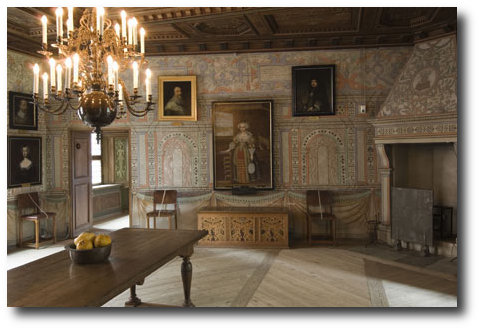 Under Eric XIV the Reformation in Sweden proceeded on the same lines as during the reign of his Gustav Vasa, retaining all the old Catholic customs not considered contrary to Scripture.

King Gustav Vasa went on to publish a bible in Swedish for the people of his country.  If he attended the “the Blood-bath of Stockholm” perhaps Sweden wouldn’t have Yahweh’s holy word, and perhaps never knew what Yeshua (Jesus) did on the cross for them.  The Swedish Bible was published in 1540-41. The men behind the translation were Laurentius Andreae and the Petri brothers Olaus and Laurentius. Of them, Archbishop Laurentius is regarded as the main person. However, had the work not been commissioned by the Swedish King Gustav Vasa, who had in effect broken with the Pope in Rome in the 1520s, the work would not have been possible. The Bible follows the German version by Martin Luther from 1526 closely, not only in language, but in the fonts used and the typography as a whole. The Danish version, printed a few years earlier, also did this.